Homepage
>
Stories
>
A Dinner With Our Amish Friends 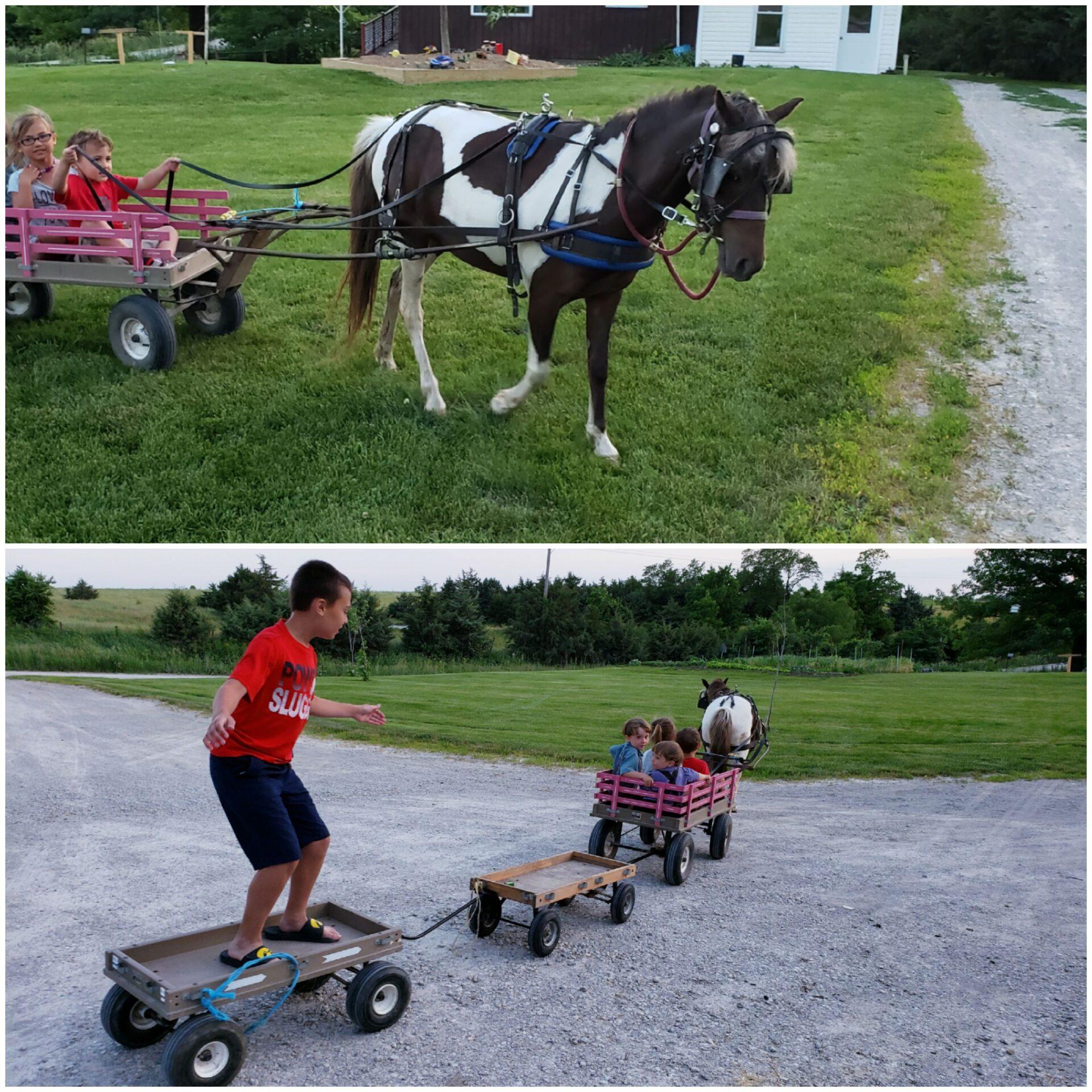 My wife and I, along with our 3 children, had the opportunity to enjoy an evening meal with a wonderful Amish family in Davis County, IA. Their home is nestled on a gravel road about 3 miles west of town and just off a little lake. We pulled up to the garage behind the house and stepped out to be greeted by a little colt, which of course excited my children. I will note that my children were born and are being raised in the midwest so they are very familiar with farm animals and the like. However, the whole experience takes on a different air due to the general unfamiliarity and excitement of a new experience. So while they had definitely seen a colt previously, their reactions strongly indicated otherwise. Our next introduction was to a pony-drawn wagon being driven around the yard by their youngest children. This is not an uncommon sight in this area as I often see young children zipping around their yards and the gravel roads with their ponies.

At this time the parents and other children were working on milking and feeding their goats so we were able to head into the milking house and explore the farm, which also housed chickens and horses. The children working with the goats were excited to show how the whole process worked and our children were enthralled…that is until they saw the baby kittens lapping up the spilled milk on the floor, then attention shifted! The next thing I knew I was having to check my daughter’s pockets (and under my youngest’s shirt) for stowaway kittens they were trying to bring home.

It had been hot and slightly muggy all day long, but when we arrived the air temperature had dropped just enough and there was a pleasant and comforting breeze that simply compelled outdoor activity. So once the chores were finished we made our way across the yard to Grandma’s house, which is where we would end up enjoying our meal. Both sets of children were pretty well comfortable with each other at this point so they scattered through the yard to play. Closest to where we parked there was an impressively built log sandbox that had been established around a single tree growing in that section of the yard. On the other side of Grandma’s house was a swing playset and a beautiful split level deck set off the front of the house that wrapped around just enough to tempt the children to jump from it onto a trampoline placed in the yard. Next to the trampoline was also a tree which they had attached steps to for another launch area.

This is not to forget the pony wagon ride as well. Our daughter was the first to grab the reins, but it was not long after that our youngest had to take a turn. Now their older brother, being the 10-year old that he is, was far too mature and cool to be seen taking a pony wagon ride. That all changed when the father jumped on the back wagon like a surfboard and rode around the yard while our youngest boy played coachman. As you can see in the photo, it was not long before our “full-grown” 10-year old was following suit. For the next hour or so the children dug, swung, jumped and rode around the yard and it was an absolute delight to see!

With the food prepared and everyone hungry from the day’s activities, we made our way into Grandma’s house. The plan was to eat outside on the deck, so we stood around the table to praise God and their family did so through a song prayer. We did not know the words, of course, but it was a heartwarming moment, to say the least. After grace, we all filed in line to fill our plates and head outside. The menu consisted of grilled burgers, a salad, ham pasta, ice cream and brownies with strawberries. The food was fresh, well prepared and delicious!

At this point in the evening the wind had picked up and the adults decided to head inside where some of the youngest children played puzzles on the floor. We had a great time conversing about nothing in particular and at one point the family opened up their hymnals and sang a few songs together. It was impressive in that you could tell this was most likely a nightly event, everyone knew when and what to sing. Even their 3-year-old was humming along in rhythm with their song. Once the songs were finished the evening began to wind down. Any offers to help tidy the place up were, not surprisingly, politely refused.

We spent the next 10-15 minutes thanking each of them and complimenting them on the evening and, of course, the food! The next order of business was to wrangle the children and check them for stowaways. When we exited the house, our daughter was standing next to the colt with her arms gently around his back while she explained to him that he would be coming home with her. Our youngest was still scooting around the yard and had the notion of driving the wagon back home (approximately 4 miles away). When we knew there were no extras attached to anyone we packed up and headed home.

Our family is blessed to have had this opportunity and we look forward to many more. Since that dinner we have received consistent inquiries from our children about acquiring a pony, kittens and a trampoline, none of which have been purchased. This was a wonderful experience for our children. We enjoyed the scenery and the food, but most of all the people. I would encourage everyone to experience new cultures on a personal level as it is a joyful experience and a true gift from God. Whether someone lives in an inner city, out in the country, or in a home with no electricity, I believe we can make the same connections and share love regardless.

No products in the cart.